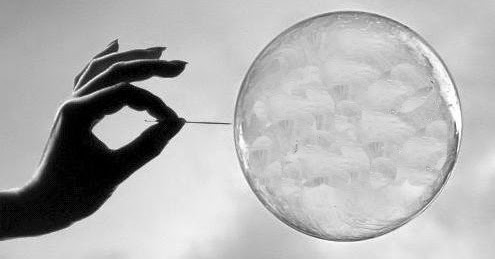 Well, no, I don’t hate it. It’s inevitable and needed and the most positive aspect of being alive. Living in a homogenized bubble, filled with bias, myth, misinformation and ignorance of those unlike ourselves is a misery of our own making. And, proudly displaying prejudice and smug judgment are not good qualities. They just aren’t and never will be. Ever.

I am not like you and you are not like me and that’s a good thing. Do you hear that? Shall I turn this post up? Your life experiences intrigue me enough to prompt a discussion about how and why you believe the way you do yet, for some inexplicable reason, you don’t want to know the how and why of me. How come? You’re too good to learn new things?

Bubbles form, float and then explode. They were never meant to exist forever so why do some people cling to their need to stay in an “unlearning” environment? Barking on and on about snowflakes and safe space demanding wimps while also grousing about failed relationships and financial hardships. These are also things snowflakes and wimps deal with but, hey, why focus on similarities?

When the inflexible name callers refuse to entertain the idea that people vastly different from them deserve the exact same rights they, themselves, take for granted it says more about their character than the people they are fearfully attacking. It’s their way or get out of America for they have appointed themselves the judge of what Americans should be. Who said only one race, one sex, one religion should reap the rewards of social acceptability, personal freedom and success in life?

Who? I think it’s pretty obvious that the top white dog always makes sure they get the bone and everyone else can just lump it. To refuse to see that and only moan about reverse discrimination or every other nonsensical Whataboutism the tragically incurious vomit up is pure poison. It is the absolute definition of a life shortchanged, an opportunity to grow misused and outright lost.

But, do they even want to grow? Maybe not. Are they so afraid to step outside of their beige bubble because they just might find out they don’t know it all, their beliefs aren’t all correct and they are actually the greedy grabbers getting all the good stuff simply because of how they look. Bastards! Taking everything for themselves and leaving nothing for anyone else!

If you are offended by being called a greedy grabber who demands everything for yourself because of the long held belief that you and those like you “deserve” the American dream more than “those people” then, good! What you are actually feeling is guilt not righteous indignation so learn from it. Guilt, after all, is a sign that something in your soul knows making derogatory statements about others doesn’t prove you are better than they are, it only proves you live in fear of retribution. It proves that you are small-minded and insecure. It also proves that hope still exists.

Tearing down those we fear doesn’t build anyone up nor does it create power. It literally activates paranoia and suspicion, the very stuff that slowly kills us from the inside out. I fear you, you fear me and eventually no one talks anymore because, god, humans are scary and learning to communicate honestly and effectively is a lost art. And, why should we talk to each other when posting false propaganda online is so much more fun? Right? No, it’s wrong. Period. Keep it up and it won’t make much difference because, you and the other soon to be extinct divisive dinosaurs will be gone. Guess who will take your place? People willing to evolve, people willing to learn from their mistakes and the mistakes of their ancestors. Crazy, right? It’s already happening.

So, before you wax nostalgic about the “good old days” when everyone stayed in their own segregated bubbles, no one challenged your bullshit and everyone just nodded in fake agreement so your fragile ego didn’t get shattered…stop and look in the mirror. Does the person you see still resemble the child you once were? The child who only wanted someone, anyone to play with and didn’t care what they looked like, what their religion was, what genitals they had, what gender they felt like inside, who they loved or what their socioeconomic status was…none of it mattered.

Just in case you need a refresher…and, yes, I’m being an over-educated snot here. Why? Because I can and it’s fun!

The DIFFERENCES did not matter! Can you hear that? Do you remember when it didn’t matter to you or…are you too caught up in the great War of Words? The Keyboard Warrior Challenge? The Comrade’s Crafty Psychological Experiment? The Their Facts Aren’t My Facts Fight? I could go on and on because so much of the shit both “sides” lob at one another has been manufactured and force fed to unwitting dupes looking for anything that might help them regain their tenuous grasp on both reality and a perceived place of acceptance and power. Remember, each time you toss crap the odds of getting poop back-splash are pretty good.

Unauthorized use and/or duplication of this material without express and written permission from this blog’s author and/or owner is strictly prohibited. Excerpts and links may be used, provided that full and clear credit is given to “In the Land of Reverie” with appropriate and specific direction to the original content.